In last week’s post, The Citizen-Consumer Dilemma, Part One: The Problems, Rink Dickinson and Deepak Khandelwal introduced some of the thinking behind our new Equal Exchange Action Forum and our analysis of some of the overarching trends which pose a problematic and bleak future for democracy, economic justice, and environmental sustainability within the global food system. They wrote about the fact that there are very few alternative trade organizations (ATOs) like Equal Exchange, who value people over profit and seek to nurture larger systemic change throughout supply chains. In the case of tea, for example, it is highly likely that the tea products lining grocery store shelves—even tea sold as Fair Trade—are sourced from huge plantations with horrendous labor conditions.

Equal Exchange has worked in the tea industry for more than 20 years. Our tea program is still relatively small, but we have leveraged our limited volume to support and strengthen a number of small-scale farmer groups in India and Sri Lanka. Small farmer cooperatives are incredibly rare in the tea industry which was built on colonial plantations from the ground up. When considering the larger industry context, it is remarkable that our small-scale tea co-op partners exist at all. 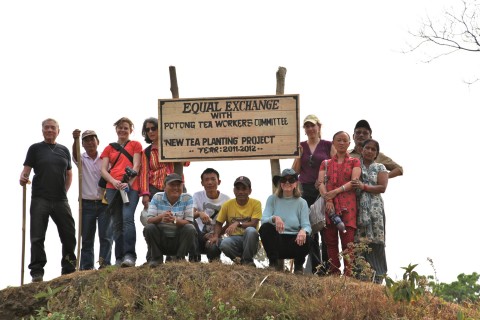 Each of the tea groups we work with has a different organizational structure, different stories, different opportunities and different challenges, making our work in tea that much more difficult to communicate and share. However, this fragility also makes our work to help these groups build capacity and market access that much more urgent and vital. At the highest level, the tea industry needs systemic change to create greater democracy, economic justice, and environmental sustainability for everyone in our supply chains. To really understand how incredible our tea partners are and the larger challenges they face, it is important to consider the larger industry context of plantations.

As a system, the conventional tea industry is actually quite undemocratic, unjust, and unsustainable by design. The colonial plantation system created a vast monoculture tea infrastructure so deeply rooted that it remains largely unchanged today, especially in the case of India, the second largest producer of tea in the world. Plantations have always been tied to colonialism - think sugar, cotton, and tobacco.

As a system, the conventional tea industry is actually quite undemocratic, unjust, and unsustainable by design.

Tea plantations were first established in India in the mid-1800s following the British East India Company’s loss of a long-standing monopoly on the tea trade with China. Enterprising British planters saw potential for profit to be made through tea production via export back to Britain and eventually established Kolkata as the imperial capital at the heart of the tea trade. This period is referred to as company rule because the region was quite literally ruled by the foreign company.

As with so many plantation systems throughout history, cheap labor was essential to the scheme. British planters recruited labor from neighboring Nepal and distant parts of India with a design to displace and disorient to create a dependent workforce. Families were also central to the recruiting scheme as they were less likely to uproot themselves and risk the unknown after their contracts with the plantation ended. Employing entire families in such remote circumstances also created an oversupply of labor, giving owners an incredible amount of power over workers. The geographical remoteness of the plantations along with the cultural, caste, and linguistic divides, created a multigenerational labor force. The combination of low-cash wages and non-cash compensation further reinforced the likelihood they workers would stay.

Today, the plantation system is extraordinarily similar to its colonial past. About 70 years ago, shortly after independence, the Indian government enacted the Plantation Labor Act (PLA), providing a host of protections to plantation workers, which had varied degrees of impact on the ground. There is so much more that could be said about the complexity of the plantation system, its history, the PLA, labor and gender justice issues—as most tea laborers are women—along with questions about the environmental sustainability of plantations. We can address more of these topics in future posts, but for now it is enough to consider the structural forces which have shaped and continue to shape the tea industry and the lives of plantation workers.

There is no blueprint for a perfect alternative model to the plantation system, but rather many small experiments underway. One exciting example can be seen with our tea partners at the Potong Tea Garden in Darjeeling, India. Potong has about 343 small farmer members who collectively run their tea garden on the site of an old colonial plantation. Potong members have majority ownership of the tea garden and control it through a system of democratic governance. Potong has also been doing incredible work to revitalize the old plantation, replanting 150 year old colonial tea bushes, revitalizing the soil and natural water sources, and reintroducing greater biodiversity. If the success of Potong continues, it could be a powerful model for the reform so badly needed in the industry.

Learn more about our tea partners or join our new Equal Exchange Action Forum to connect with us more around tea.