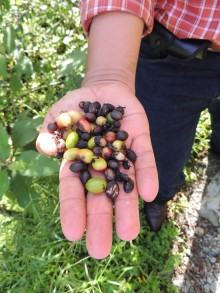 I recently visited San Gaspar Chajul, a predominantly indigenous town in Western Guatemala where the Asociacion Chajulense (or simply “Chajul”) coffee co-operative has its headquarters. I spoke with the general manager, Arcadio Daniel Galindo, who told me they were in crisis: an outbreak of coffee leaf rust in the region was devastating coffee production and only getting worse.

Coffee leaf rust, or roya in Spanish, is a fungus that overtakes coffee plants and cuts off their nutrient supply, eventually stripping them of reproductive ability or killing them. Last season, the co-op’s farmers were dismayed to watch the fungus thrive and spread between periods of unusually heavy rainfall, dry spells and waves of intense heat.

The destruction has been swift and brutal. Arcadio told me there had been an 80% drop in coffee production, meaning an 80% drop in income for his co-op’s 1,591 farmers and their families this year. “Looking at the crisis we are facing today,” he said, “it is hard for me to think about the past 25 years that I have dedicated to building this organization and not be saddened.”

Perhaps most alarming is the fact that the coffee leaf rust epidemic is not limited to the Chajul co-operative: it has caused a regional crisis in Central America over the past three coffee seasons, wreaking havoc on farmers who lack the resources to stem the damage. Sick and dying plants require long-term investment and cash to replace them, as coffee plants require four years from seed to the first income-generating harvest. This means that affected farmers, already suffering from a drop in income, must find the means to invest in their farms with the expectation of a four-year delay on seeing a return.

As the threat of coffee leaf rust looms over farmers each day, it represents an even greater problem: climate change. At the First International Coffee Rust Summit, hosted by Promécafe in Guatemela in April 2013, industry experts agreed that climate variability was having a significant impact on the presence of coffee rust. And indeed, our trading partners witness these changes daily: during our field visits this past year, farmers throughout Central and South America expressed major concern over the changing weather patterns, storm intensity, temperature and rainfall.

These environmental shifts are more than just anomalies – they are destroying the livelihoods of small farmers who rely on every harvest to survive. The need for solutions is urgent, and goes even beyond short term treatment of dire symptomatic problems like coffee leaf rust. Long-term solutions that address the root causes of these changes are necessary, and require research and investment from parties with enough power and capital to make a difference. 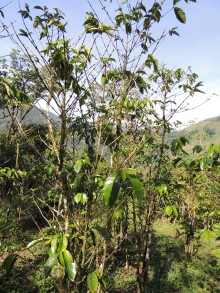 I asked Arcadio what he thought Equal Exchange could do as an importer and roaster during this crisis, and he responded by saying that trade solidarity and funding were necessary to rescue coffee growing in the region. His thoughts echoed the conclusions of the attendees of the International Coffee Rust Summit, who agreed that “long-term purchase commitments, viable pricing structure, ongoing awareness-building … engagement with donor agencies and demonstrated commercial commitments” were necessary from trade partners in order to combat this crisis.

Coffee drinkers might not feel the depth and pain that coffee leaf rust has caused growers, but with awareness we can become powerful and influential forces of positive change. Together as consumers, roasters, and importers, we have resources that can be directed toward areas of research and action that will support producers as they bear the brunt of this large-scale crisis. There must be a combined effort to make real, systemic changes in how these problems are addressed in order to ultimately solve them. Equal Exchange is committed to our partners and meeting the expectations laid out at the International Coffee Rust Summit, and we believe we must continue working together toward a more fruitful future for coffee production.