The road heading south between Guayaquil and Machala, on the coast of Ecuador, is lined with banana plantations. Endless rows of green banana plants stretch as far as the eye can see. Economic activity in this tropical region revolves almost exclusively around banana production and export. In fact, Ecuador is one of the world's largest banana exporting countries. Approximately 40% of bananas consumed throughout the world are produced here, leaving the country through the docks at Machala's Puerto Bolivar. For this reason, Machala is often referred to as the banana capital of the world.

Ecuador joined the ranks of other Latin American countries known as "Banana Republics" after World War II, and similar to the rest of the world, the banana industry in Ecuador has been controlled by five major corporations: Dole, Del Monte, Chiquita, Bonita and Fyffes. Unfortunately, the history of these five multi-national corporations has been no less nefarious in this region of the Americas than it has been elsewhere. (For more information on banana history, see the end of this article). 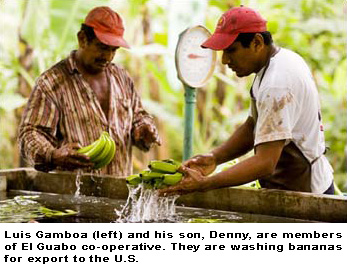 The presence of the banana industry can be seen everywhere and it's no secret which folks are running the show. And yet, something else is also happening here in southern Ecuador. You have to look a little harder, past all the corporate indicators and infrastructure. But if you do, you'll see signs of something new and fresh and exciting igniting sparks both in Ecuador and abroad. And from all evidence, this new initiative in Ecuador, tied to an international movement, is gaining visibility and momentum.

Imagine this: in a region where multi-national companies own every stage of the industry from banana plantations to packing stations, warehouses, trucks, containers, and shipping lines, an association of 400 small banana farmers have decided that they've been controlled for long enough and have decided to join together to build their own democratically-organized export business with the dual goals of running a top-quality, sustainable Fair Trade business while improving the economic and social conditions of the members' families and their communities.

Against all odds, this entrepreneurial and socially-conscious organization, the El Guabo Association of Small Banana Producers, is gaining ground. Their achievements are creating ripples of change: in the farmers' lives and communities; in their health and the health of the environment; and increasingly in the banana industry as a whole.

What are those signs of change that this innovative Fair Trade Organic banana program is sparking?

Amidst the endless monoculture of banana plantations, increasing numbers of small-scale farmers are cultivating their bananas under the principles of "agro-forestry", interspersing bananas with cacao and citrus trees, and cultivating organically and under shade, to protect the farms' natural eco-systems and the health of both producers and consumers. El Guabo also provides low-interest loans to farmers to carry out environmental improvements and recycling programs on their farms.

When you think about the fact that the average American consumes 26 pounds of bananas a year and that bananas are the world's most popular fruit, the potential for impact - on the farmers livelihoods, on our environment, our health, and our values - is tremendous. We want high quality food at an affordable price, but what if we had a choice? What if we could buy high quality, affordable fruit, and also know, down to the farmer, who grew it, how they grew it, and what impact our purchase had on a local community?

Next time you purchase a banana, look to see if there's an Equal Exchange sticker on the bunch. If there is, you are choosing to connect yourself to these courageous banana farmers who are making history for themselves, and quite possibly, for the banana industry as a whole. Align yourself with these small farmers and become part of this new banana revolution!

More about the ugly truth of banana history
For well over a century, the banana conglomerates, specifically Dole, Del Monte, Chiquita, Bonita and Fyffes, have influenced every level of social, economic, and political history in Latin America. They have controlled the fate not only of the millions of workers who toil on their plantations, but have also been responsible for determining national lending, tax credit, land allotment, environment, and labor policies, even dictating the fate of the highest government officials. The most infamous case occurred in 1954, when the United Fruit Company (predecessor of Chiquita Brands) received the support of the CIA to back a military coup against Guatemala President Jacobo Arbenz, because his land reform policies interfered with the company's expansion plans.

The banana plantations operated by the giant companies have been notorious for poor working conditions and blatant labor abuses, subjecting many of the banana companies to numerous lawsuits for these and other activities. For example, several of the corporations were sued by their workers and the thousands of affected individuals for respiratory illnesses, cancer, infertility, and birth defects, a result of continued exposure to pesticides used on the banana plantations, long-banned in the United States. Dole and Chiquita have been involved in lawsuits by family members of farm workers, labor unionists and community members who were killed by paramilitary groups (on the U.S. terrorist list) in Colombia after it was revealed that the corporations had been paying these groups "protection money" for years in order to continue operating in the region. Just this year, Dole and Chiquita have again received attention for a possible role in the military coup against Honduran President Manuel Zelaya, after he decided to raise the country's minimum wage over their opposition. Finally, while less severe, the extent of corporation control over the entire banana supply chain has also enabled this handful of companies to dictate contracts determining supply and price, thereby extending their reach into supermarkets and homes across the globe.

While some argue that Chiquita, Dole, and the other three banana companies have certainly improved their image, if not their practices in recent years, the question remains: are these the companies that we as consumers wish to support? Until very recently, natural food stores, co-operatives, and other retail establishments have had no choice regarding which brand to carry. Farmers have had no choice regarding the company where they could sell their bananas and consumers certainly have had no choice in which bunch to bring home. Fortunately, as we discussed above, the choice now lies with the consumer. Thank you for supporting small farmers, a just food system, and for being part of the change.