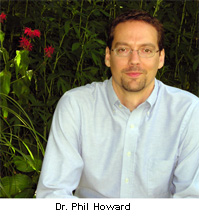 It's a question Dr. Phil Howard, an assistant professor at Michigan State University, has spent a lot of time trying to answer. Howard's research focuses on the food system, the changes occurring within that system, and how those changes affect communities.

So why does it matter? Many consumers choose foods that come from organic small-scale or family farms, because they don't want to buy foods from multinational food companies. Little do they know, what appears to be organically grown by a family farm, while still organic, might actually come from a major corporation like Coca Cola, Clorox or Kraft. But because parent companies aren't required to put their name on packaging, it isn't always obvious who actually owns the product.

One of Howard's main projects has been to figure out who has that ultimate ownership. To demonstrate his findings, Howard created several visual representations, which are available on his Web site. The charts certainly get the point across: The organic industry is becoming increasingly consolidated.

After seeing Howard's charts and hearing him speak at an Equal Exchange retreat, I had the opportunity to ask some more questions about his research.

AS: What does the consolidation of the organic food industry mean for consumers? Why should folks care who owns what?
PH: Consolidation in the organic food industry means that fewer and fewer people are making decisions about how organic food is grown, processed, distributed and sold. If you want to have a voice in these decisions you should care whether the people involved are likely to be receptive to your concerns, or if they are only accountable to Wall Street.

AS: How does this consolidation affect food quality?
PH: It's hard to say with certainty. Some companies that have been acquired by multinational food processors have maintained their quality, while others have worked to increase profits by cutting costs in ways that we might not be happy with. This might mean importing more organic food ingredients from countries where wages are lower. Or in the case of Odwalla after its acquisition by Coca-Cola, it could mean dramatically reducing the percentage of organic ingredients.

AS: What affect does consolidation have on organic farmers, specifically small-scale farmers?
PH: Some small-scale farmers have lost price premiums which enabled them to stay in business, as larger farms were able to achieve economies of scale and/or externalize some of their costs. Others lost markets as the retail environment changed. For example, as Whole Foods grew they centralized their distribution system. They are now much less willing to buy from a small-scale farmer for one store, when they can buy from a large-scale farmer who can supply stores in an entire region. Consolidation in retailing also makes farmers more vulnerable in price negotiations with supermarkets. Farmers without other markets may have no choice but to accept a very low price for their product.

AS: Why did you choose organic consolidation as your research focus?
PH: Like most of my research, it was the result of responding to questions people asked me. I studied consolidation in commodities, dairy and supermarkets at the University of Missouri. When I talked about these trends in California people suggested I look at the organic industry, because it was happening there, too. Then people asked me which organic companies were still independent, so I put together a short list of some of the largest, nationally distributed independent brands.

AS: "It's a chart that's worth a thousand words," wrote Laura Sayre about your organic industry chart. When did you start making your consolidation flow charts? Why did you choose this visual format?
PH: I started the first chart in the summer of 2003, to accompany an article on the broader topic of food system consolidation for California Certified Organic Farmers magazine. I chose a visual format primarily because it helped me to make sense of the situation in a way that a text-based list could not. I was able to see the whole picture with just a glance. Most people are able to take in more information with their sense of vision than their other senses, even before paying conscious attention. A new field of information visualization is developing to take advantage of this capacity.

AS: In your opinion, is it better that the organic industry 'goes mainstream,' by superstores like Wal-Mart starting their own organic lines and making organic options more available to a large number of consumers, or does this ultimately have negative implications for the organic industry?
PH: There are some positives in terms of reducing synthetic pesticide use, which is often used to rationalize this process. Ultimately though, if you have other concerns such as social justice, ecological sustainability, humane treatment of animals, or democracy, we need to recognize that what is now called 'organic' does very little to incorporate these concerns. They may have been ideals at the beginning, but they didn't make it into the USDA standard.

AS: What can consumers do to help stop the consolidation?
PH: One way is to support smaller-scale and independent farms and processors through your purchases, if you can get that information about size and ownership. Sometimes this will mean paying a bit more, because big corporations can afford to sell at a loss if it means driving competitors out of business. Political action to enforce anti-trust laws and stop subsidizing the largest players is also needed.

AS: Any recent discoveries you'd like to share?
PH: Private label organics is a very recent trend, and growing very rapidly on a global basis. Safeway introduced its organic label less than three years ago, and it has grown to include 300 products. What's most interesting is that they are licensing it to other retailers, so you can now find their O Organics products in a French supermarket chain's stores in Taiwan.

AS: What's the best way for consumers to stay informed on this topic?
PH: Watchdog groups like the Organic Consumers Association and the Cornucopia Institute are good sources for staying informed, particularly for efforts to weaken organic standards.