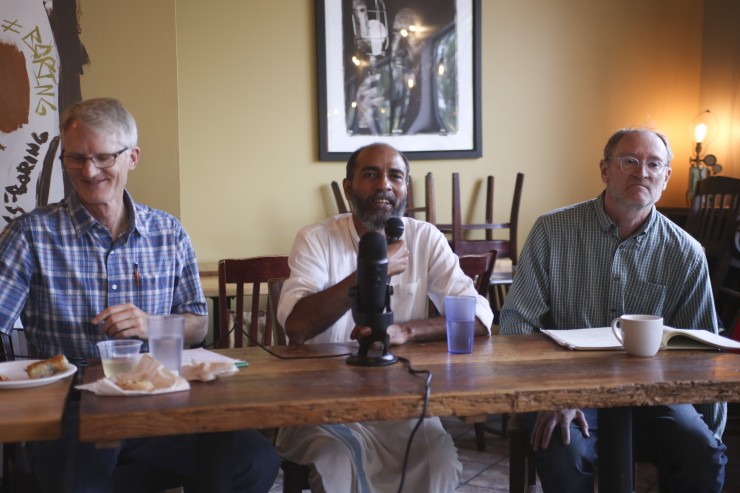 Listen to the audio here.

I’ll just talk about just the aspect of Fair Trade as we do it.

Over about 5-6 years of our engaging with Fair Trade we began increasingly becoming uncomfortable with what we found to be standard practices in Fair Trade, or the new growing tendencies in Fair Trade  that was in, sort of, increasing dissonance with what we wanted Fair Trade to be, with what we thought Fair Trade was. The guarantees of Fair Trade in terms of a minimum price, in terms of organized action, in terms of other securities that is provided were disappearing. We began this journey by saying trade not aid. We found increasingly this market becoming aid through trade with the Fair Trade premium and its charity component finding great marketing ops, photo-op-able premium projects that could be displayed elsewhere but the component of trade justice increasingly moving away. And we said, we have to make sure that what we do is of relevance both for our partners and our customers and people who buy our products and for ourselves.

And one of the growing concerns we realized for all consumers across was the issue of climate change. I want to be in solidarity with farmers all over but I am very concerned whether this massive haulage of cashew and pepper and cocoa and sugar across continents is actually an environmentally sensible thing to do in a climate challenged world. One of the first things we said when evaluating ourselves beyond standard Fair Trade was to say we would like to be judged on the biodiversity angle. The goal is a little ambitious there, but we’ve left it as exactly as that. Which is to say, that we would want to see every FTAK farm moving on the conditions that are akin to a tropical rainforest. We talked of these 60-70 standing crops in a farm which we don’t want it as an accident but as a deliberate choice. Can we get into more tree crops? Can we look at farm forests? Can we look at ecosystem services that these farms provide? Can each of these contribute significantly to carbon sequestration?

The second area that we said is- look, historically we have been encouraged to move out of food security. We have been told to contribute to cash crop economies. We have been told that cash crops is what gives you more leverage because you have cash in your hands. We would now want to Fair Trade our way into food secure farm families and communities. Therefore there’s substantial investments of the collective going into food security measures. The target that we have set ourselves there is to ensure that each each FTAK farming family is a net food supplier. Which means that they would produce at least in calorie value more food than the family requires. So there’s food being contributed. And by food I mean not coffee and pepper and cashew. It means staples that we can consume.

The last is on the question of gender. As I said in the beginning, farming families, not just in Kerala, but probably substantially across the world are patriarchal in construct, therefore the land is owned by the man. So by legal reckoning a FTAK member whose membership is determined by his land ownership, would be a man. That’s the first thing that we inverted when we set ourselves up. We said FTAK membership is for the farming family and any adult member of the household can represent himself or herself in the organization. We are moving on from that to say the homestead farms that we had, which sort of disappeared and got into monoculture plantations dictated by the cash crop dependent farming that we were doing, needs to be brought back and that would mean that women who were central in the management of the homestead farming economy, because the kitchen dictated what would go into the farm first not the market, would then get back their due role and place and you would say along with that in the management of the affairs of FTAK where they would assume leadership positions. The Vice chairperson of the org who is a woman.  A district president who contested in the open quota and won. Increasing participation of women in the organization. Most of the neighborhood collectives are actually organized and lead by woman and most of the income generation activities now focus on women.

It’s a work in progress on all three fronts- Bio, FS and Gender Justice but that is our Fair Trade + 3 program. We say our least common denominator is the Fair Trade Standards where we would really want to tick box and say we are compliant. But we would want the Equal Exchange’s of the world to evaluate us on the progress we make on these three issues and by that token also realize that what Equal Exchange has always stood for, which is that this is a partnership, a solidarity economy that we are talking about, it’s not a charity regime where we still have donor-recipient relationships. That is, I know is at the heart of EE wants to do. I believe we are partnering with EE in that mission.

Part 2 - Tomy on the Challenges of Mainstreaming Fair Trade

Listen to the audio here.

Mainstreaming Fair Trade. Which is what all of us fought for. All of us strived for that. We wanted this not to be a small little niche. We wanted everyone to have Fair Trade. But we, while in the initial years, we thought this was a diligent, slow, painful strenuous work, which meant you had to build up cooperative movements from scratch, we had to build up their capacity from scratch, they didn’t know a thing about what coffee grades were, what quality was, what roasting was. You had to build all that capacity. Washing facilities. Primary curing facilities. Find money to invest. We decided that’s all too much of work that is meant for some of these flower children of the 70s who got some ideas into their heads. I see some of them before me here. That’s work meant for them. We are, you know, market savvy, quick on the go, we can’t wait for all that work. We need the product yesterday on the shop shelf. And therefore we decided all that work is not important. The label, it’s market traction and the license fee it can bring is one consideration probably. More than anything else, we are good people at the end of the day so we would want to know that we have touched instead of 200,000 farmers, half a million farmers. Then we would like to see us touching 1mill farmers, now we’ve touched 1.6mill farmers, therefore we are doing good. Leave alone questions of trade Justice, leave alone questions of fair price, leave alone a host of issues that got us onto this terrain in the first place.