Alien Fruits and Co-ops in Cahoots 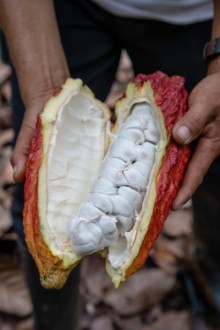 Have you ever seen a cacao pod? In the wild or on the farm, it awkwardly hangs from the trunk and branches of the Theobroma cacao tree. An alien fruit of seemingly endless variety —shaped like a papaya, hard like an acorn squash and often ridged like one, too. It comes in reds, browns, golds, purples, sometimes different varieties growing right alongside one another. Cutting one open reveals a world no less strange than the exterior—filmy, gooey white membrane enrobes brown and purple beans that are about the size of large grapes. The aroma from the interior is alluring, though: citric and bold, floral and sweet, even woodsy and minerally, depending on the variety of pod you’re sniffing. None of that compares to your very first invitation to eat the fruit. It might go something like this:

Once, outside of Capetown, an innocent-looking Afrikaner beseeched me to try a raw olive—totally uncured, straight from the tree. He said it would be an eye-opening experience. Which was a total lie, because my eyes were definitely shut tight against the absolutely horrendous, astringent, throat-parching flavor while he laughed uproariously. Given that experience, or a similar one that you might have had, hesitation could be deemed natural when proffered the slimy, white, bumpy mass that is the cacao bean in its raw form.

You: “What do you call the white stuff on the outside of the beans?”

Them: “That’s the mucílago (mucilage). Try it, it’s sweet. Just suck it off the bean.”

If your confidence is still flagging at this point, totally understandable. “Sucking off mucilage” is hardly an activity that inspires visions of delectable comestibles. Hopefully, you overcome that lack of certainty, and stick that snotty blanco bean in your mug. Will you like it? If you can stomach a lychee fruit crossed with a pineapple, you’ll be fine. Your next words will undoubtedly be: “wow.”

These insights, powerful as they are, are not easily come by. To taste cacao, you have to go to cacao. That likely means equator, jungle, heat, mosquitoes. Is it worth it? I didn’t know it was, until Equal Exchange brought me along on their delegation to Peru. I hope I can convince you, dear reader, to try it for yourself some day. It could change you.

In Peru, fine aroma cacao, the beans that fetch the highest prices and the most prestigious buyers, is on the rise. Exports of cacao and chocolate products exceeded $300 million in 2017, with almost $7 million of that being fully processed chocolates. Some small slice of that $7 million is the chocolate that we use in our Bakery here at Willy Street Co-op (to the tune of about 8,000–10,000 pounds of chocolate chips per year!). Furthermore, while Peru is still contending in the top five of cacao- and chocolate-producing countries worldwide, they lead the whole dang pack in producing organic cacao. To explore the gravity of these revelations, we have to head back into the jungle of Peru, to the region of San Martin, and finally to the villages of Lamas and San Jose de Sisa.

Places like Lamas and Sisa don’t rise to the top of the “places to see” lists authored by tourism websites around the world. However, if cacao is your goal, the San Martin region is gaining in notoriety for its bounty of beans. The whole area is now considered part of the genetic epicenter of cacao. As if the fruit could get any weirder or more varied, Peru somehow found a way to feather its cap with this native son and boldly build upon it. The fletching has largely been the work of a stew of organisations: government (both foreign and domestic), NGOs, and grower cooperatives like the one we visited, Oro Verde. 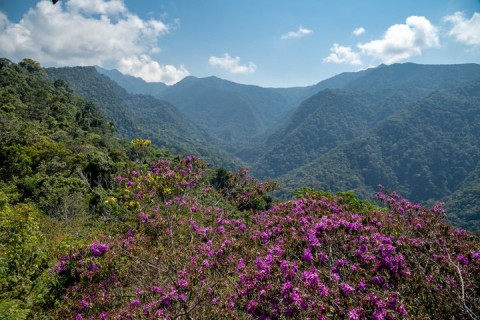 A photo snapped mid hike of the San Martin region.

Oro Verde, according to Hiderico Bocangel, one of its first managers, was born out of that organizational stew in the 1970s in an effort to lure farmers away from highly profitable coca farming. Coca, of course, was most famously the main ingredient of Coca-Cola (or of cocaine, if that’s more your thing). At first, the focus of Oro Verde was coffee, with cacao coming into vogue as a way to farm plots that were at lower altitudes (coffee is best over 1,000 meters) as well as in response to years of coffee rust disease forcing farmers to adapt. Headquartered in Lamas, the co-op grew over the decades (now boasting over 1,500 farm families), convincing more and more farmers to invest in their land with cacao and coffee. The message Hiderico and his cooperators laid down was simple (but not easy): plant your land with cacao or coffee. Plant trees for wood and shade. Plant palms to retain water in the soil. Plant other fruits to attract bugs and animals that will help control pests so that you can avoid using chemicals. Let us show you, it works.

Ten minutes outside Sisa (by bumpy jeep ride), Oro Verde member Deciderio and his family are living proof of this model. On Deci’s chacra (small farm), he and his family cultivate cacao alongside countless varieties of palm trees, hardwood trees, banana trees, even pineapple bushes. Deci is a true missionary of this model of land stewardship. As he led us around his 20 hectares (about 50 acres), he pointed out this diversity of flora and affectionately referred to the different species of cacao and other beneficial plants as exelentes vecinos (excellent neighbors) or buenos amigos. Deci has an amazing clarity of purpose in his words as he describes this filosofía of farming. He leads us to the border of his farm and points to his neighbor’s plot. It is devoid of significant undergrowth and the cacao trees are small and scant—a stark contrast to the aliveness of his land, an aliveness that is evident at all layers, from soil to canopy. Deciderio sympathetically states that his neighbors “don’t get it” and “don’t want to be told what to do.” The starkness of it only seems to add to his resolve. Working with Oro Verde and subscribing wholeheartedly to their model of land and crop management enhances his family’s life and allows him to build and grow, as a farmer and a human being. 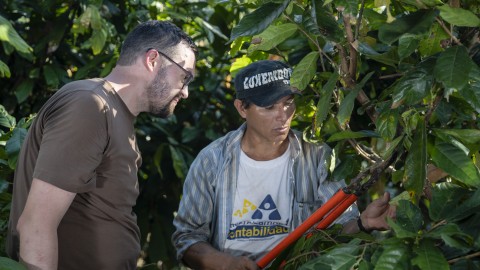 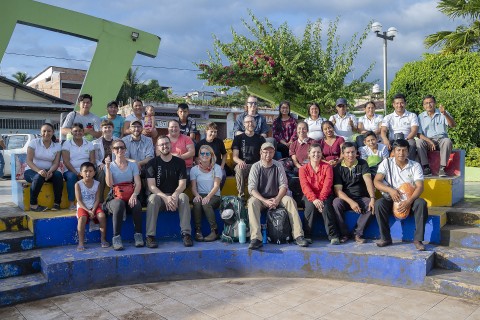 Growth is the vital component of all of this. In Peru, Oro Verde fuels the growth of products like cacao, but also the growth of the people who produce it. They help create a culture of innovation and learning, which in turn empowers their members to produce their very best. It’s a cycle of reciprocity and support that also delivers another type of growth: economic. The result of all this work is an agricultural product that transcends base-commodity status and commands premium prices that sustain the farmers and allow for reinvestment into the cooperative and its communities. Back here in the States, Equal Exchange ensures that the end results of this holistic producer model are amazing, high quality products. Products that businesses like the Willy Street Co-op and others like us will buy in great volume because we know that you, our Owners and shoppers, want to help fuel the growth of regions like San Martin, villages like Sisa, families like Deciderio’s. It’s a partnership that you can join.

Join Equal Exchange in Madison next week for a series of events and try some of our delcious chocolate! To get involved reach out to Emily Ambrose at eambrose@equalexchange.coop