Cooperative Bananas, In Dollars and Cents

When you purchase a conventional banana at a grocery store, there are certain costs that your everyday low price covers: the fruit itself; the international shipping costs; the trucking from the warehouse to the grocery stores. These costs are internalized, meaning they’re accounted for in the final price you pay.

But there are hidden costs to banana production that you won’t pay a cent for at the cash register. The medical treatment for illnesses contracted by farm workers exposed to heavy pesticides. The lost wages of plantation workers who miss work due to harassment. The loss of income for small farmers selling fruit to brokers below minimum price.

Some of the burdens are apparent immediately, like the detrimental effects of insufficient income on a family’s food security, while others will take time to fully manifest, like the consequences of climate change exacerbated by agricultural carbon emissions. Though the associated costs are linked directly to banana production, they are borne in large part by the communities surrounding farms, rather than the players downstream in the supply chain who ultimately consume the bananas.

The costs that are pushed onto farmer communities are known as externalized costs or externalities. At Equal Exchange, we discuss the externalized costs of banana production often, as they are a motivating factor in the development of our alternative, fair trade cooperative model of banana business. We know that externalities in bananas are nothing new – the historical socioeconomic ramifications of the U.S. banana industry are difficult to fathom – but even today, there has been little research dedicated to teasing apart these costs and studying how to reduce them most effectively.

That may be changing. Fair Trade International has recently released a study by the research firms TruCost/True Price to measure, for the first time, the externalized costs of the banana industry in concrete monetary terms, per 40-pound box of bananas, which is around 80 bananas. In the banana sector as a whole, the estimated figure is a tremendous $6.70 of external costs per box of bananas  ($6,432 per shipping container!), 60% of which corresponds to social costs, like insufficient income, and 40% environmental costs, like water depletion. That means that for each 40 lb box of bananas produced, an additional $6.70 of external costs - not paid for by customers - are generated for producer societies to bear. However, for fair trade certified banana production (including plantations, small farmers, organic and conventional), the figure drops to $3.65 per box, mostly due to lower social costs. In other words,the fair trade groups studied generated 45% lower external costs than the sector on average.

Why pay more for bananas? 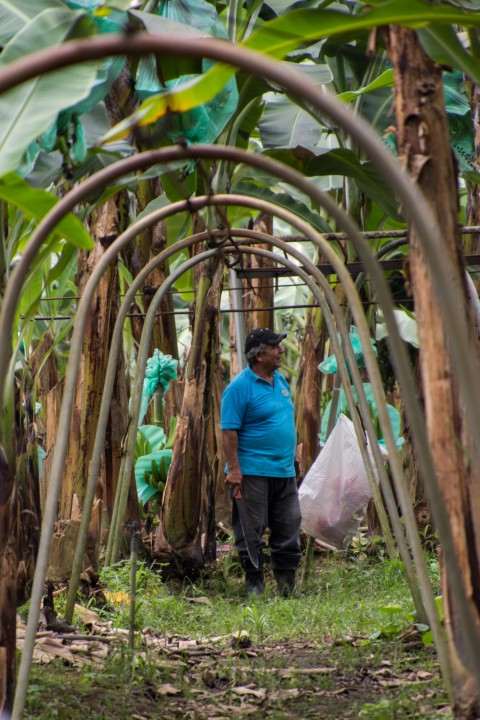 This past June, I traveled with colleagues to the southern coast of Ecuador to learn about the operations of  one of our farmer co-op partners, la Asociación de Pequeños Productores el Guabo, or AsoGuabo. As a cooperative, AsoGuabo works for the benefit of its 130 farmer-members, exporting around 30 shipping containers of fresh bananas around the world each week. This is extremely ambitious work, which requires a full-time 25-person staff. AsoGuabo is considered a highly successful co-op – “la pionera” or pioneer in Fair Trade and organizational development, per co-op President Edwin Melo -  within a region responsible for approximately 30% of the world’s banana trade.

When I arrived in the provience of el Oro for the first time, I was astounded by the sheer visible magnitude of the industry: miles and miles of banana plantations, as far as the eye can see, destined for supermarkets around the world, at mostly rock-bottom prices. Following a full day of farm visits, I sat at the desk of Lianne Zoeteweij, General Manager of AsoGuabo, as she worked into the evening. She explained that although large plantation owners can export containers by themselves,  “a small producer can never do that. They need the association. And an association brings also more costs with it, because of course you need bookkeepers, you need logistical people, technical peoples, and so on. So, it becomes a little bit more expensive than a huge plantation.” That’s one reason it’s important for small farmers to have access to the fair-trade market.

When we visited farms on banana-packing day, while bunches were cut, cleaned, stickered, and packed into boxes to be whisked away to the warehouse, it was apparent how critical a role the long-term, skilled cooperative staff members play in AsoGuabo’s commercial success. At one small farm, we met with Marcelo Rebolledo, the Logistics and Quality Control manager for AsoGuabo. Marcelo has decades under his belt working with banana logistics, both for big companies and for AsoGuabo. 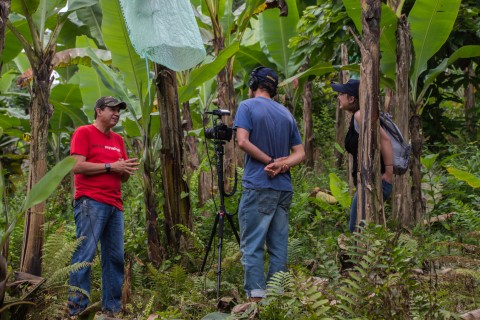 According to Marcelo, in addition to managing logistics with many farmers to pack a single container, fulfilling orders for multiple smaller independent brands – such as Equal Exchange – requires unique logistical finesse from the banana co-op team, and is also uniquely satisfying.

“[A typical big banana business] will only pack three or four brands. We are packing many different brands, with very small volumes ...  for example, an order of only 8 pallets to send to England; or 3 containers for the U.S., things like that. Always so many brands, a little here and little there – it’s a much more complicated job for us. But we like it! Because the result that is achieved is something really lovely for small farmers. That’s the truth.”

The result of the co-op’s monetary investment in enthusiastic professional talents like Marcelo and Lianne – internalized costs that are factored into the banana price -- is that small farmer-members can earn a viable and steady income, maintain their own land, receive membership benefits, and retain democratic control over their own export businesses. Additionally, under Fair Trade standards, banana co-ops earn an additional $1 premium per box on top of fruit price, which is allocated democratically by farmer members to business, social, and environmental projects of their choosing, another vehicle for small farmers to add value to their communities and engage in mitigation of externalized costs directly.

Still, for all the success, it’s important to emphasize that even in this unique model, there is room to improve. Recall that FTI’s study found an average of $3.65 in external costs/box for fair trade producers. One important area for improvement identified by FTI’s study, particularly for small farmers, is in optimizing productivity to augment farmer income and reduce resource usage. In this arena, for example,  AsoGuabo is consistently investing in solutions. Recently, the co-op broke ground on a biofábrica to sustainably produce organic fertilizers on-site, a project funded through the democratically allocated Fair Trade premium. Additionally, AsoGuabo is running experiments to improve soil health and water retention, and hires an entire technical team to assist farmers in productivity and quality improvements. Thanks to the co-op structure, farmers can collectively decide to retain earnings and allocate premiums to invest in projects like these that will pay off for producer communities in the long-run.

Ultimately, all of this hard work on the part of producers to build robust, sustainable businesses will succeed if those of us living in banana-importing countries acknowledge that paying a bit more upfront for EE bananas saves great costs to farmer communities later. It is not just conjecture or anecdotal evidence; there is data to back up the model we support. As Lianne of AsoGuabo put it,

“We are showing, with facts, that small farming is possible. There is a lot of competition, of course, here with plantations. We are showing it is possible to compete, not only on quality, but to keep prices reasonable – not exactly as low as large-scale farming, but it’s still possible to maintain smallholders in business and give a fair and honest price to consumers as well.”

When you purchase an Equal Exchange banana – whether you’re a distributor, a grocery store produce manager, or an individual filling your shopping cart – you are paying for a product whose real costs are more transparent. You are paying for the sustainable operation of a democratically organized, farmer-led co-op which guides responsible business decisions. You are contributing for trained, local staff to manage complicated logistics with many smallholder farmers; for a fair and steady price to the farmers themselves; for social premiums to support co-op development, additional member benefits and community projects.

You are paying a fair and honest price for delicious and healthy food. Doesn’t that sound like an equal exchange?