The Fight for Gorkhaland

One of the most important tea sourcing regions for Equal Exchange is Darjeeling, India, a municipality of the West Bengal state located in the foothills of the Himalayas, just under Nepal. Since early June there have been widespread protests and strikes, and the entire area - including the entire tea industry - has been shut down for over 60 days. The reason for the unrest is the fight for Gorkhaland. 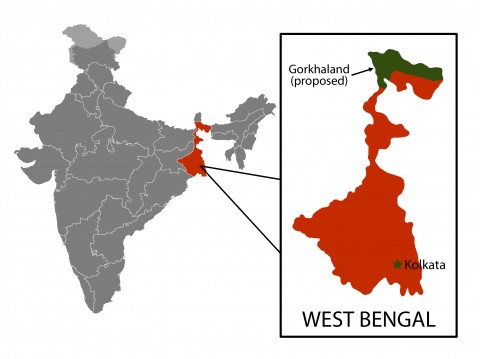 Here’s a quick summary of the situation and links to articles for more information. By no means do we have a full grasp of the situation or the history, but it is really important for us to learn, understand and analyze. This is all part of knowing where our food comes from. If anyone has opinion, thoughts or anything to add, please jump in.

When India gained Independence from British rule 70 years ago, the existing provinces and kingdoms were organized into states. Over the years, the structure of the states has continued to evolve with districts and regions being reorganized and new states being formed. The major piece of legislation driving changes was the States Reorganization Act of 1956, which reorganized states based on linguistics (there are 22 official languages with hundreds of other less spoken languages or dialects). Today, India has 29 states with the most recent change being the creation of Telangana in 2014.

The Gorkhaland movement wants to separate Darjeeling and surrounding areas (parts of Dooars and Siliguri) from the State of West Bengal and create a new state. While some concepts of an independent Gorkhaland predate independence, the modern movement started in the ‘80s and was lead by the Gorkha National Liberation Front political party (GNLF). The basis for the demands is that the people of the area - the Gorkhas - speak a different language (Nepali), have a different culture, and don’t want to be governed by the primarily Bengali-speaking people who live far away in the state capital of Kolkata. After widespread violence and over 1,000 deaths, a deal was made in 1988, that, while not creating a state, did create a semi-autonomous body that would have jurisdiction over certain local issues, called the Darjeeling Gorkha Hill Council (DGHC).

Despite the creation of the council, the movement for statehood has persisted and evolved. In 2007, a another layer of complexity was added when a group split off from the GNLF to form a rival separatist party called the Gorkha Janmukti Morch (GJM). In 2011 a new body was formed, the Gorkhaland Territorial Administration (GTA), another version of a semi-autonomous body with regional powers. In 2013 demands heated up again when the central government announced that a different area (the northern region of the Andhra Pradesh state) would be split off and turned into a new autonomous state called Telangana.

The most recent events started in June of this year when the West Bengal government, currently lead by the Trinamool Congress party, made an announcement that Bengali, the primary language spoken across the southern part of the state including the capital of Kolkata, would be required in all schools across the entire state. This announcement was not well received by the Gorkha community and was the catalyst for a new round of serious protests and marches. The GJM party officially called for a bandh (a strike initiated by a political party) and also received support in this move from the rival GNLF political party. The result has been a full shut down - government offices, schools, and commerce including the entire tea sector - of Darjeeling and the surrounding areas. Today (August 22) marks the 70th day of the bandh.

Equal Exchange’s primary tea partner is Tea Promoters India (TPI), a family-run business based in Kolkata. Many of its factories, farms, and affiliated small farmer groups are located in the Darjeeling area. This includes a key small farmer partner for Equal Exchange, Potong Tea Garden. The bandh has resulted in unpruned tea bushes, overgrowth of weeds, and empty factories. And the closure has come during the most important seasons: first and second flush. The situation is serious and we are still learning about the medium- and long-term implications to TPI, Potong, and the rest of the tea industry.

To learn more, check out these links: