How Equal Exchange Aligns Our Capital with Our Mission

For nearly 30 years, Equal Exchange has been a leader among Fair Trade food and worker-owned businesses. Less widely-known is that our worker cooperative has also been a major innovator in the way that social mission-driven companies can secure financing. But that’s changing as our capital program reaches new levels of success and inspires others to follow our financing model.

Preferred Class B Shares
Our ground-breaking approach allows mission-driven companies to get direct financing from their customers and supporters without giving up operational control or being pressured to sell out—as they would if they were getting money from angel investors, venture capitalists, or private equity firms. Using this approach, companies can offer investors the prospect of modest, but fair, financial returns without putting employee control or the firm’s social or environmental mission at risk.

In April 2015, we closed our most recent funding round which raised over $4 million in preferred stock – the largest stock sale ever by a worker co-operative in North America. The total invested via these preferred shares now exceeds $16 million. But this isn’t high-stakes venture capital where backers expect the company to either sell out or go public. Instead it’s slow financing from over 600 people and institutions that share the company’s values, and who want it to help it grow without ever putting those values at risk, or undermining the absolute control of Equal Exchange’s 120+ worker-owners. 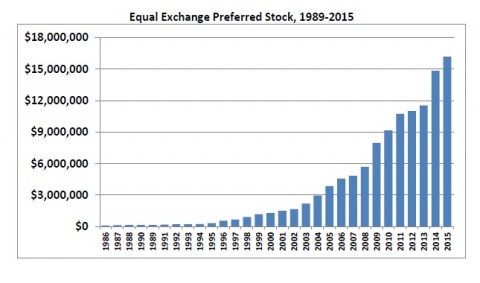 The model was introduced to Equal Exchange’s founders in the 1980’s by Boston’s ICA-Group, an organization that has been supporting worker-owned enterprises for almost 40 years.

Because part of Equal Exchange’s founding purpose was to be a role model enterprise we have assisted, or inspired, other co-ops and socially minded businesses to replicate or adapt our equity model. Some, like Real Pickles in Western Massachusetts, and the Boston food waste recovery company CERO, sell shares openly to the public through Direct Public Offerings. Others, like the Colorado-based rooftop solar panel installation company Namasté Solar, sell shares through financial advisors and to other supporters who connect with the company directly. Two other Massachusetts enterprises, the Artisan Beverage Cooperative and the Dorchester Community Food Co-op, have also followed Equal Exchange’s example.

Equal Exchange mainly uses the 506 exemption of Regulation D of the Securities and Exchange Act. This rule allows the company to accept up to 35 investors during each offering who have a sophisticated knowledge of business and finance, but who are not millionaires, or what the SEC refers to as “accredited investors.”

Although private companies have always raised capital from outside investors, what’s different with the Equal Exchange model is that investors agree to put money in without getting either control or the possibility of a jackpot windfall down the line. The company does promise to pay a modest target dividend, but even this is ultimately at the discretion of the worker-owners. Critically, the workers, too, are prohibited from cashing out, a rule that the workers themselves voted to put into the company bylaws. If they ever sold the company, they would only get back the money they had put in. The net proceeds would have to be donated to another Fair Trade organization. In this way, they operate Equal Exchange like a trust.

The stock itself has a fixed price, can only be sold back to the company, and has to be held for at least five years. This reinforces Equal Exchange’s vision that these kinds of economic relationships (like the ones we have with our farmer suppliers) should be built for the long-term, not the quick buck. In return, we offer investors an annual dividend with a target rate of 5 percent. That return isn’t guaranteed though, and has varied between 3% and 8% since 1989, depending on how the company is doing. Over the company’s history, our annual dividend has averaged 5.18%, although there are no guarantees about the future. 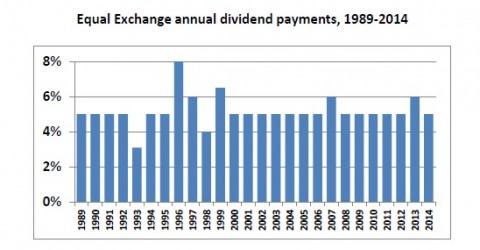 The workers themselves put half of their portion of annual profits into a joint account that invests in the company. It currently has over $1.8 million, making our staff, as a group, the largest owner of Equal Exchange’s preferred shares. Not surprisingly, some of the other investors include cooperative businesses in the United States and even some of our farmer co-op supplier partners in Nicaragua and Mexico.

Worker-owner Class A voting shares
Equal Exchange sells one other type of stock, Class A shares, which may only be bought and held by current employees. After an employee has been approved to join the co-operative by the current worker-owners (which typically happens at the beginning of their second year) they must purchase one share of Class A stock. It currently costs $3,500, and its priced is indexed to inflation. Like every worker-owner, including the co-founder and company President Rink Dickinson, they may only own one share of this stock. The share entitles the new worker-owner to one vote in co-op matters, plus the right to nominate people for either inside or outside board seats, as well as the right to run for the board themselves. Other rights and responsibilities also come with owning a Class A share. When a worker leaves Equal Exchange, they must sell the share back to the co-operative at the same price they paid for it.

Debt Financing From Mission-Aligned Sources
Because we have twice as much equity capital as debt, as well as growing sales, and a devoted customer base, today we have our pick of possible lenders. Yet, we also seek to align our borrowing with our social mission of supporting cooperatives and local communities. Therefore we spread our borrowing among several institutions including the Co-op Fund of New England, the National Cooperative Bank, the Calvert Foundation, RSF Social Finance, and Eastern Bank. A special distinction goes to the Co-op Fund of New England. They were our first lender way back in 1986, a time when no one else would consider lending to this small, strange start-up.

Retained Earning – Workers Investing For The Co-op’s Future
Equal Exchange also counts over $5 million in retained earnings, which represent the cumulative profits that workers have reinvested annually since we first turned a profit in 1989. Each year, worker-owners reinvest 60% of net profits. 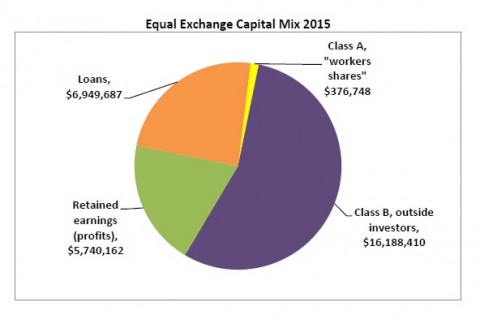 Unique Certificate of Deposit
To add to our innovative array of financing options, Equal Exchange created a unique certificate of deposit, a pioneer instrument in the field of socially responsible retail banking. It gives individuals a new ethical financial product to replace generic CDs. Through it, individuals earn competitive rates even as they help Equal Exchange to access more affordable import financing. People with as little as $500 in savings who are not wealthy or sophisticated investors can purchase this CD from Eastern Bank. While the bank pays a competitive interest rate on the CD, the depositor also agrees to let the money be used as collateral for a line of credit that the bank makes available exclusively to Equal Exchange at a below-market interest rate. The company uses these funds to help finance its seasonal coffee purchases from farmer cooperatives at high Fair Trade prices. All the while Eastern Bank is able to offer customers a product they cannot find anywhere else.

Uses of Capital
This type of mission-aligned capital has fueled Equal Exchange’s near doubling of sales over the past five years to over $60 million in 2014. The company owns an 80,000 sq ft warehouse and roasting facility in West Bridgewater, Massachusetts, and operates facilities in nearby Canton, as well as Minneapolis and Portland, Oregon. The company also operates cafés in Boston and Seattle. Lastly, thanks to the abundant access to capital on co-op friendly terms we have had the means to expand beyond our signature product, coffee, and add new product lines like organic, Fair Trade chocolate, tea, bananas, avocados, olive oil, nuts, and dried fruit.

Note: Daniel Fireside has been elected to the boards of Namaste Solar and the Cooperative Fund of New England.

THE DISCUSSED ABOVE, INCLUDING ANY DISCUSSION OF EQUAL EXCHANGE, INC.’S (THE COMPANY’S) ANTICIPATED OPERATING RESULTS AND FUTURE EARNINGS, INCLUDING STATEMENTS ABOUT THE COMPANY’S ABILITY TO ACHIEVE GROWTH AND PROFITABILITY, CONTAIN FORWARD-LOOKING STATEMENTS WITHIN THE MEANING OF SECTION 27A OF THE SECURITIES ACT OF 1933, AS AMENDED. THE COMPANY’S OPERATING RESULTS MAY DIFFER SIGNIFICANTLY FROM THE RESULTS INDICATED BY SUCH FORWARD-LOOKING STATEMENTS. THE COMPANY’S OPERATING RESULTS MAY BE AFFECTED BY CHANGES IN TECHNOLOGY, THE EFFECT OF FOREIGN POLITICAL UNREST, THE ABILITY TO HIRE, RETAIN, AND MOTIVATE, TECHNICAL, MANAGEMENT, AND SALES PERSONNEL, THE RISKS ASSOCIATED WITH THE FEASIBILITY AND MARKET ACCEPTANCE OF NEW PRODUCTS, THE EFFECTS OF CHANGING COSTS, EXCHANGE RATES, AND INTEREST RATES.