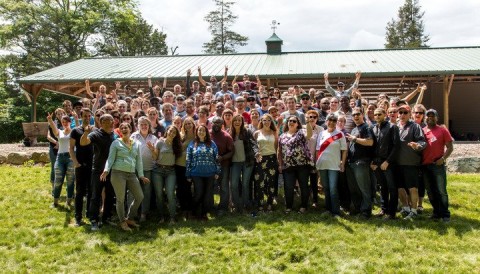 At Equal Exchange we all walk around like we own the place. That's because we all do! Our co-op has over 120 worker-owners, each with an equal stake - and an equal vote - in our business. We believe that we should expect no less from ourselves and each other than we demand of our farmer partners. For that reason we have organized ourselves as a democratic worker co-operative, now one of the largest in the country.

The concepts are quite simple:

A worker cooperative is an alternative for-profit structure based upon standard democratic principles. It is not designed to maximize profits, nor returns to investors, but rather to bring to the workplace many of the rights and responsibilities that we hold as citizens in our communities. These principles include one-person/one-vote equality; open access to information (i.e., open-book management); free speech; and the equitable distribution of resources (such as income.)

A worker co-op is not owned by outside shareholders or a small group of founders or partners but by all the employees in equal portions. Top level managers and entry-level employees alike own an identical share and receive an equal share of any profits or losses. These "worker-owners" both elect the Board of Directors and fill six of the nine Board seats. The Board in turn is responsible for hiring and supervising management. Consequently a circle is formed, as in American civic democracy, of everyone being accountable to someone else.

The delegation of responsibilities is very much like that of conventional firms - which allows for efficiency - except that at Equal Exchange those at the "bottom" of the organizational chart are, as owners, also at the "top" of the same chart.