Coffee Quality Manager Beth Ann Caspersen is currently in the Democratic Republic of the Congo to judge the country's first-ever coffee cupping competition. Here's part two of her updates from the field. Read part one here. 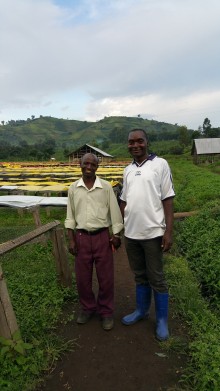 A common thread throughout all of my visits with coffee producers includes the issue of productivity and in the Democratic Republic of the Congo (DRC) where coffee farms had been all but abandoned a decade ago, increasing productivity while producing excellent quality coffee is a central issue. More than a decade of war made coffee an almost impossible crop to export, and thus, bananas became a crop that supported the Congolese people. However, disease brought that commercial product to an end, and after the war when coffee had mostly been abandoned, neighboring Rwandan coffee began to rise up in the specialty coffee market. It was then that coffee was smuggled across Lake Kivu and sold as “Rwandan” coffee.

Today, coffee is once again becoming the cash crop of choice and is the primary source of income for many Congolese in the greater area of Minova. Here you can see jutting mountains that surround the lake, sparsely planted bananas, cassava and beans interlaced into the landscape. But the near death of the coffee sector which had once prospered, left the shambas (farms) in dire need of renovation, which has been both a cultural and an economic shift.

Many coffee farmers are resistant to uprooting old and unproductive coffee trees because it will mean that they will lose the small amount of coffee they had been receiving from that tree, only to wait for 3-4 years for their younger trees to produce. The return on investment by uprooting old trees or planting new trees on unused land will exceed the minimal income they are receiving from unproductive coffee trees in the years to come, but for a farmer that has only 700 trees on their shamba, it feels sacrificial; it affects their income in the short term and people have been afraid to do it. While this may seem like a challenge, many of the farmers can see the shifting coffee movement in the DRC and the farmers of SOPACDI co-op voted to use their Fair Trade premiums to support the infrastructure of the coffee processing stations and to build 14 coffee nurseries to raise coffee seedlings. All to be planted later on their own shambas.

Today, I took a small boat up the eastern shores of Lake Kivu to visit one of the nurseries at the Tsheya coffee washing station to learn more about it. Over the last year, the nursery raised and distributed 175,000 coffee trees to the members of this primary society. On May 5, all of the coffee seedling beds had been reseeded to grow an additional 75,000 seedlings in the next 12 months. While I was disappointed to only see the grass and hay that covered the seedlings as they were too young, I was excited to know that more coffee was on the way. And one of the most exciting parts of this initiative is that this was what the farmers voted for; each farmer is entitled to up to 500 coffee trees of the Bourbon variety of coffee to plant on their shambas - free of charge - it is their benefit as being part of the SOPACDI co-op. Farmers are replanting and this will in turn increase their productivity. SOPACDI hopes that this will improve farmers’ incomes and help to elevate the quality.

Stay tuned for more from the DRC!