Small farmer co-ops cultivate democracy - it's in their roots 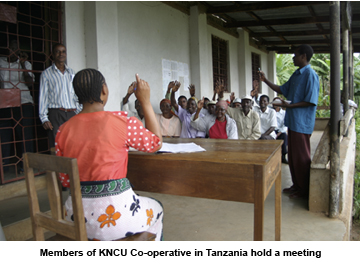 Each May we celebrate World Fair Trade Day. It feels important to take this opportunity to revisit the roots of Fair Trade, and reconsider what we aim to accomplish. Most people understand the critical importance of higher prices, advance credit and direct relationships; they allow farmers to stay on their land, send their children to school, and diversify their incomes. Yet, there's another equally - some would say even more important - goal of Fair Trade, one that seems to be slowly disappearing as new iterations of "ethical trade" and "direct trade" appear in the market: empowering communities and social movements. It is for this reason Equal Exchange chooses to work with small-farmer co-operatives.

In our culture, individualism is steeped into our subconscious from an early age. The American Dream says anyone who works hard enough can "pull themselves up by their bootstraps" to become a millionaire - or the country's President. Americans have a hard time with the idea that movements are built by many anonymous, "ordinary" people each putting in "their grain of sand." In contrast, many indigenous cultures are built around this central theme of "community"; even most European countries place a higher premium on "collective welfare" than we do. For people who have had to shed blood and lose family members to earn their most basic rights, it is obvious that true success can only happen through collective efforts, organization and co-operation.

This empowerment of indigenous peoples, and the poor in general - many of whom rely on farming as their livelihoods - is a concept that makes some people uncomfortable. As a society, we are okay with poverty alleviation and charity, but when the world's disenfranchised begin to organize and take control over their own lives, businesses, and communities, when they start gaining economic power in the marketplace and political power in their countries, and in our own - that makes people nervous. Why would we rather raise money and give it to "poor farmers" than support their efforts to make their own livings?

For me, this notion of empowerment is the missing ingredient when folks in the coffee industry start talking about "going direct," or referring to a co-operative as yet another "middleman." The strategy places too much emphasis on one person's benevolence, and gives that person, or company, the upper hand. Today, I come to your village and establish a friendship, offer a scholarship for your family's children and purchase your highest-quality coffee. Tomorrow, I might go elsewhere. It is a strategy, that while well-intentioned and produces positive results, ultimately does little to build democratic control and power at the producer level.

These same strategies: scholarships, direct relationships, and community projects, have a completely different, and I would argue stronger impact, when they occur within the framework of an organized co-operative, association, or community. It's a question of who's in control, who makes the decisions, who is acquiring experience, and ultimately who has the power to set the terms.

It's about producers, consumers, and alternative trade organizations working together to ensure that the terms of trade are more fair. Higher prices - yes; advance credit, direct relationships, and social projects - all of these are critical. But the emphasis and ultimate goal of all our work needs to be about equity and social justice.

Fair Trade through co-operatives enables farmers to invest in their own businesses and improvements in their own communities. Through co-ops, they can participate in other organizations and social movements to influence, improve upon, and change national trade and agricultural policies. In this way, organized and well-run small farmer co-operatives can acquire the economic and political power necessary to create lasting and deep-seated change.

Read more on our blog at www.SmallFarmersBigChange.coop