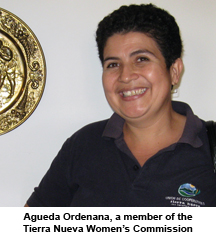 At the Tierra Nueva coffee and honey co-operative, some new initiatives are helping women to improve their economic standing. Gender roles in Latin America, as in most parts of the world, are inequitable. In Nicaragua, for example, there's a common understanding that the ownership of land belongs to men; when a woman marries and inherits land from her father, her husband automatically assumes control over it.

Therefore, it's all the more remarkable that Tierra Nueva, a union of 600 small farms, is making an effort to change this paradigm. In 2006, the union, or secondary co-op, applied for a grant to conduct a gender survey among its farmers. The focus groups and interviews documented what was already widely known: that the participation of women in Tierra Nueva farming co-operatives was extremely limited. As a direct result of these findings, Tierra Nueva created a gender policy program. It formally authorized the actions of the Women's Commission, which is composed of five female representatives from the various primary coffee co-ops.

In 2008, the Women's Commission founded the "Female Leadership School," which offers classes on topics such as: legal tools for protecting the rights of women and children, techniques for creating healthy relationships within the co-op, and trainings on building self esteem and confidence. The commission is addressing all aspects of the gender issue and has established a course for men on the "building of a new, sensitive masculinity." The reality is that although some husbands may discourage their wives from participating in the programs, as more women take classes or involve themselves in new enterprises, they are influencing their female neighbors to become more active. The co-op has a budget that's devoted to guarantee the gender equity programs, which includes the creation of a new curriculum for women who wish to start their own small businesses.

Given these initiatives, Tierra Nueva women are getting more involved in the economic life of the co-op – particularly its growing honey business. An increasing amount of women are purchasing hives and paying fees to other farmers so that they may install hive boxes on their land when certain flowers blossom - or they may give the farmer a portion of the honey harvest. Says Agueda Ordenana, a member of the five-member Women's Commission, "Honey production is a good situation for the women; the costs are low and they can help one another to succeed." The most challenging part of the work is the transportation of the hive boxes to the next farm. "That's when teamwork comes into play," Ordenana said. "The beekeepers pool their resources to rent a truck and to physically help one another to move the hive boxes to new locations." There are about 100 female beekeepers who own about 500 hives.

There's also a youth skills program designed for the next generation of co-op members, which is appealing to new female members. This year the leadership of the co-operative encouraged three younger women to enroll in a training for the four coffee "cupping" - or quality control - spots. The women are learning skills for possible careers in what has been a male-dominated field.