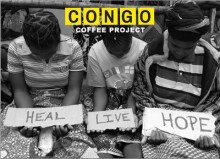 Coffee Quality Manager Beth Ann Caspersen is currently in the Democratic Republic of the Congo to judge the country's first-ever coffee cupping competition. Here's part one of her updates from the field.

This week I boarded a plane to a historically war-torn part of central Africa.

The trip comes just two weeks after a story broke from Burundi regarding a coup attempt by the Army General Godefroid Niyombare. It is a complex situation, but, in short, President Pierre Nkurunziza of Burundi made strides toward extending his rule beyond the legal term limits. It is a controversial move which was met by violence, protest and insecurity with more than 70,000 residents fleeing the area of Bujumbura to neighboring Tanzania, Rwanda and the Eastern Democratic Republic of the Congo (DRC) - my destination.

International news can make you a bit crazy, not just the repetition when something is going wrong, but also the gravity each piece of the story can contain. Everyone in the area is worried and while the situation is ongoing to the south of where I'm visiting, I boarded the plane to Rwanda (I can't fly directly into the DRC), feeling anxious, but also believing in the importance of this work.

So here I am, in the small city of Minova, DRC, an up and coming area for coffee production and the home to SOPACDI, the small farmer co-operative Equal Exchange has purchased coffee from during the last five harvests.

I usually visit the DRC in the fall, before the coffee harvest, but this trip is different. I am visiting SOPACDI members for a few days, but the ultimate purpose of my visit is to prepare for the very first coffee cupping competition ever held in the DRC. I was invited to be the head judge of the competition, named Saveur du Kivu, to celebrate the burgeoning coffee movement in Eastern DRC, and to celebrate Run Across Congo, an amazing event that precedes the cupping competition.

On May 24, a group of nine strong and brave women started running seven marathons in seven days! These women are raising funds and awareness for gender equality initiatives while promoting the re-emergence of a specialty coffee industry in the growing regions of Eastern DRC. There are many organizations involved with this effort, including our friends at Twin Trading, Eastern Congo Initiative, Catholic Relief Services, and On The Ground.

Having spent almost five years working on the Congo Coffee Project, I am deeply invested in our work in the DRC and when I was approached to head up the Saveur du Kivu competition, it was a logical yes. This is about a larger movement to promote peace and I want to see the coffee movement grow and prosper. I knew that helping to organize and lead a coffee competition could be a tremendous challenge, but I am prepared to work through whatever comes our way. The Congolese deal with multiple challenges around water, electricity, lack of healthcare, infrastructure and more. While I am worried about some of the material aspects of the competition itself, I am confident that we will figure it out and work through it. This is a groundbreaking event for the coffee movement in the DRC and I am so proud to be part of it. I am here on behalf of Equal Exchange, all of the coffee farmers in the Kivus, and anyone that has suffered in the hands of violence. Stay tuned for more updates.